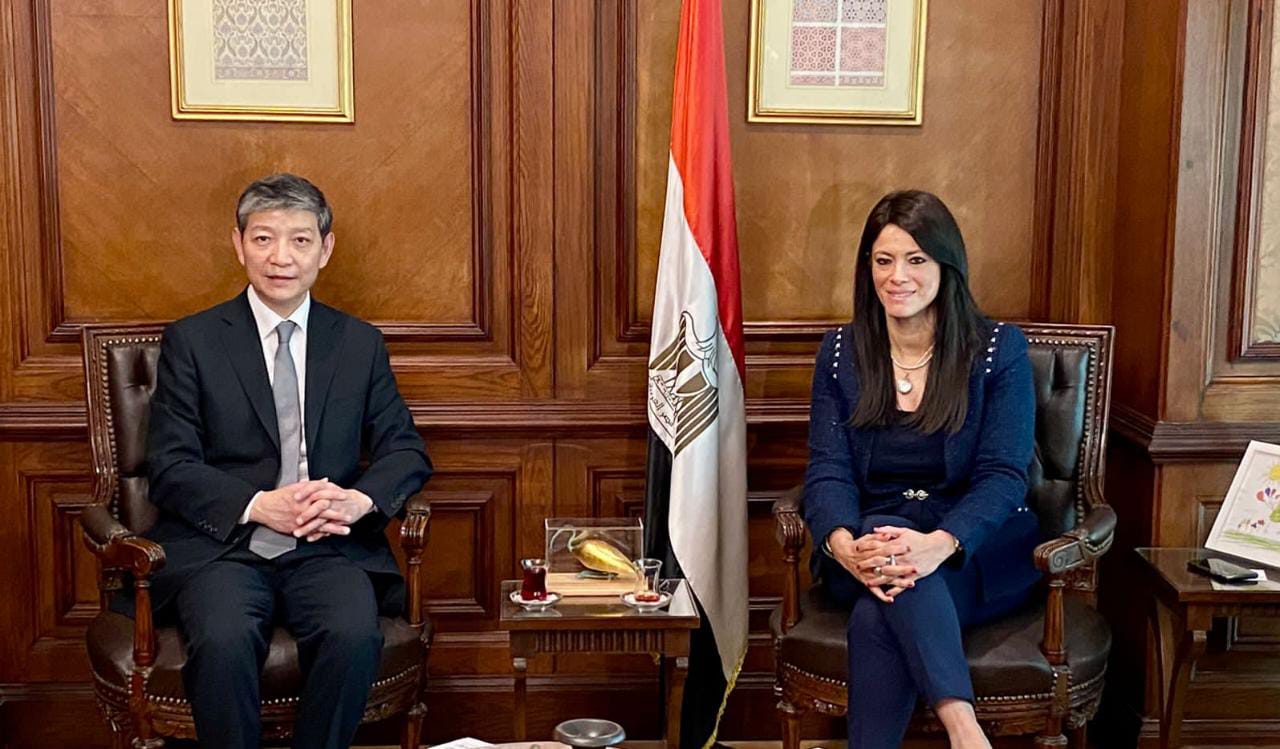 The Minister of International Cooperation discussed the mechanisms of development finance within the NWFE Program.

The Ministry is keen on expanding the scope of cooperation with Chinese companies to localize industry, and increase investments and technology transfer.

The China-Arab Summit will represent a boost in joint relations, and both countries work towards enhancing cooperation in light of joint priorities.

The Chinese private sector companies have strong interests in working in Egypt, particularly in the field of electric cars and renewable energy.

The Chinese Ambassador thanked the Ministry of International Cooperation for continuous follow-up and for overcoming challenges in accelerating the pace of development cooperation efforts.

The Ministry of International Cooperation H.E. Dr. Rania A. Al-Mashat met with the Ambassador of China to Egypt Liao Liqiang in the presence of the technical teams of the embassy and the ministry to discuss the upcoming China-Arab Summit that will be held in Saudi Arabia on December 7. This meeting also falls within the framework of the periodic meetings held with multilateral and bilateral development partners to discuss strengthening joint cooperation and ongoing projects.

Al-Mashat welcomed Liqiang, stressing the depth of the joint Egyptian-Chinese relations and strategy in a diverse portfolio. The Minister noted the relations between the leaders of both the Arab Republic of Egypt and the People's Republic of China are a priority, and have witnessed major developments in the past year due to common objectives and keenness from the Egyptian side to benefit from the Chinese development experience.

The meeting discussed upcoming projects and grant documents that will be signed soon. This includes a project on a 4-set mobile vehicle system for the Ministry of Transport, a vocational training center in the Suez Canal Economic Zone (SCZONE), and a feasibility study grant for a biosafety laboratory project to support research on viruses, epidemics and pandemics. In this regard, Al-Mashat emphasized the Ministry’s keenness on continuous coordination between multilateral and bilateral development partners, as well as relevant national authorities and ministries to advance relations and accelerate pace of development cooperation.

Moreover, the Minister reviewed Egypt’s Country Platform for the Nexus of Water, Food and Energy (NWFE) Program and its projects. Al-Mashat explained that this program comes on the back of the announcement of the 2050 Country Climate Strategy, and the Nationally Determined Contributions (NDCs), in order to stimulate climate action and green transformation, pointing out that the platform aims to mobilize development financing mechanisms, development grants and private sector investment.

Al-Mashat noted that the NWFE program reinforces the Government of Egypt’s commitment to move from the pledges to implementation, in line with the COP27 objectives, which was successfully organized by Egypt in Sharm El-Sheikh last month.

Additionally, Al-Mashat stressed that Egypt is committed to private sector engagement, and that it is keen on cooperation with the Chinese private sector especially in order to localize industry, to transfer and exchange of modern technologies, and to expand the scope of cooperation to include all fields and increase green investments.

For his part, the Chinese Ambassador congratulated the Minister on the success and distinguished organization of the COP27 saying, "we congratulate Egypt, led by H.E. President Abdel Fattah El-Sisi, for accomplishing this mission, which came at an exceptional time that the world is going through. The People’s Republic of China was keen to participate actively in the conference and to support Egypt.”

The Ambassador pointed out that the China-Arab Summit, which will be held soon, represents an opportunity to strengthen Egyptian-Chinese relations. This is also in line with China's commitment to enhance relations with Arab and African countries, which have already witnessed a strong start and push under the leadership of the Chinese President and his Egyptian counterpart. The Ambassador also added that the People’s Republic of China is looking forward to more joint projects with the Government of Egypt in light of meeting the development priorities within the 2030 vision and in line with the Chinese Belt and Road Initiative. This is especially after the convening of the 29th National Congress of the Chinese Communist Party and the re-election of the President Xi Jinping as Chairman of the Central Committee for a third term.

Moreover, the Ambassador also expressed his appreciation to Al-Mashat and the role played by the ministry’s technical team in coordinating efforts and in enhancing communication with various national entities to implement projects within the joint cooperation portfolio. He added that Chinese private sector companies are keen on cooperating with Egypt in development, especially in the localization industry, exchanging technology knowledge, and in expanding renewable energy, electric cars and other green areas.

It is worth noting that the total cooperation portfolio with China amounts to about $1.2 billion to implement many projects in various development sectors, including electricity, health, education, vocational training, and others. This also includes $335 million in development grants. In the past four years, 1,100 training programs have been implemented with China and this has benefited over 4,000 government officials. This is in addition to 25 specialized programs in priority areas, from which 300 government cadres have benefited in the fields of health, agriculture, electricity, tourism, population and water resources.

Last November, Al-Mashat and Liqiang signed the new Economic and Technical Cooperation agreement within the framework of joint development efforts and strategic relations between the two countries. Through the new agreement a number of grants will be made available to accelerate development in priority sectors in Egypt; all in line with the country’s 2030 vision.