Minister of International Cooperation Dr. Rania Al-Mashat Signs a Letter of Intent with the European Union to Provide a 35 million Euro Grant to Support the Energy Pillar within the National Platform for Green Projects "NWFE" Program and Witnesses the Signing of a Memorandum of Understanding on the "Mediterranean Hydrogen Partnership" 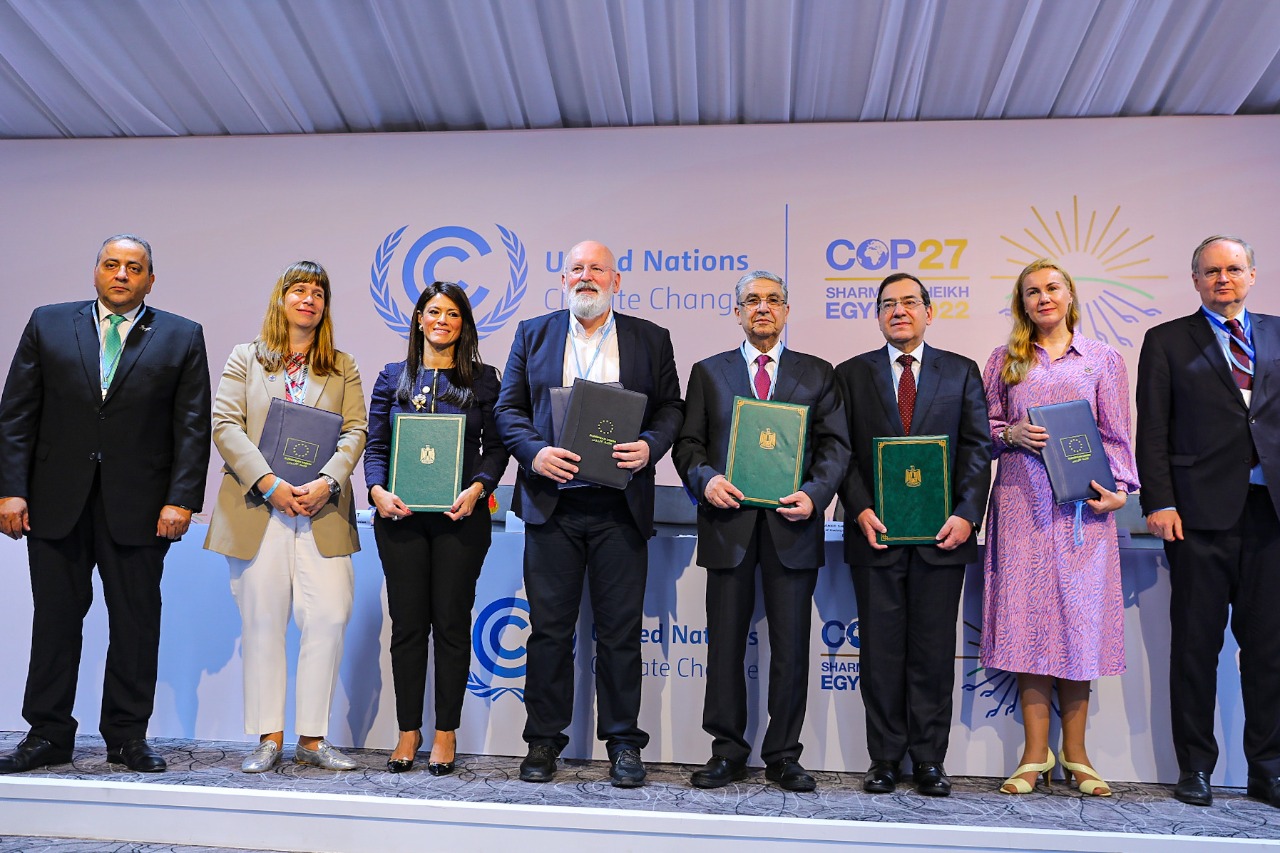 • Minister of International Cooperation: Egypt through the "NWFE" program provides a clear message to the world of the importance of moving from pledges to implementation

• Al-Mashat: The platform is based on a clear national commitment to the transition towards green transformation and renewable energy

• Vice President of the European Commission: Happy with what we are doing with Egypt to promote the transition towards renewable energy

Dr. Rania Al-Mashat, Minister of International Cooperation, signed a letter of intent with the European Union to strengthen the energy hub within the National Platform for Green Projects Program"NWFE", worth 35 million euros, and witnessed the signing of a memorandum of understanding with the European Union and the European Bank for Reconstruction and Development, on "Mediterranean Hydrogen Partnership", to promote investment in renewable energy, together with Dr. Mohamed Shakir, Minister of Electricity and Renewable Energy, and Engineer Tariq Al Mulla, Minister of Petroleum and Mineral Resources.

The signing was attended by Ambassador Omar Abouche, Assistant Minister for Foreign Affairs and Secretary-General of the Coordinating Secretariat for the Implementation of the Egyptian-European Union Partnership Agreement, Mr. Frans Timmermans, Vice-President of the European Commission, Mr. Christian Berger, Head of the European Union Delegation in Egypt, and Ms. Kadri Simson, EU Commissioner for Energy, Ms. Heike Harmgart, Regional Director for the South and East Mediterranean Region of the European Bank for Reconstruction and Development.

In her address, Dr. Rania Al-Mashat, Minister of International Cooperation, said that under the letter of intent the European Union will provide development grants worth 35 million euros to the European Bank for Reconstruction and Development, To develop and promote investment in renewable energy and electricity generation, and to improve energy efficiency, promoting the transition to a green economy and low-carbon development,

The Memorandum of Understanding will also play a role in the transformation of renewable energy sources, which limit the use of traditional sources of pollution to help reduce current climate changes.

The Minister of International Cooperation explained that the European Union is a strategic partner of the Egyptian government in many projects related to the energy sector and other areas as well. One of the projects implemented in this context is the project to promote reforms in the renewable energy and water sector through capacity-building worth 10 million euros Energy transformation project of 20 million euros and the Suez Bay wind farm of 30 million euros to generate 250 megawatts of electricity Energy Policy Support Program Project, with a value of Euro60 million.

Al Mashat explained that the energy hub of the National Green Projects Platform "NWFE" program promotes the conversion of thermal-powered power plants to renewable energy, through the implementation of 10 gigawatt wind power projects to replace existing 5 MW thermal-fueled plants, in the light of the National Sustainable Energy Strategy 2035 through which the State seeks to shift to clean energy.

She emphasized that the projects included in the "NWFE" program are characterized by a comprehensive approach to development, which is distributed in many regions and governorates of the Arab Republic of Egypt. The target stations for replacement are located in Cairo, eastern delta, western delta and central delta, reflecting the overall development efforts being implemented by the State. The project also promotes the efficiency of the exploitation of Egypt's natural resources, including wind power in the Gulf of Suez, the Red Sea coast and Egypt's Upper Egypt.

The Minister of International Cooperation said that this day is very important among what we are doing with development partners during the climate conference, and with regard to cooperation with the international community to promote climate and development efforts in Egypt, through the national platform of green projects "NWFE", which promotes job creation and stimulates efforts to expand clean energy, and provides an example of the transition from pledges to implementation.

Mr. Frans Timmermans, Vice President of the European Commission, said: "We are happy to take this step to promote the transition towards renewable energy in Egypt, in a world that is changing very rapidly and where challenges are increasing. If we want to achieve rapid change, we have to support the industry. This will not be achieved without clean energy, so we are working with Egypt to develop the green hydrogen partnership. Egypt is a leading and important model in this field and we are witnessing the great interest of President Abdel Fattah el-Sisi in this matter. "

Ms. Kadri Simson, Commissioner for Energy and Climate of the European Union, said that this week is very important during the climate conference as we see many steps to promote climate action and development through the NWFE program, which promotes job creation and development partnerships. "