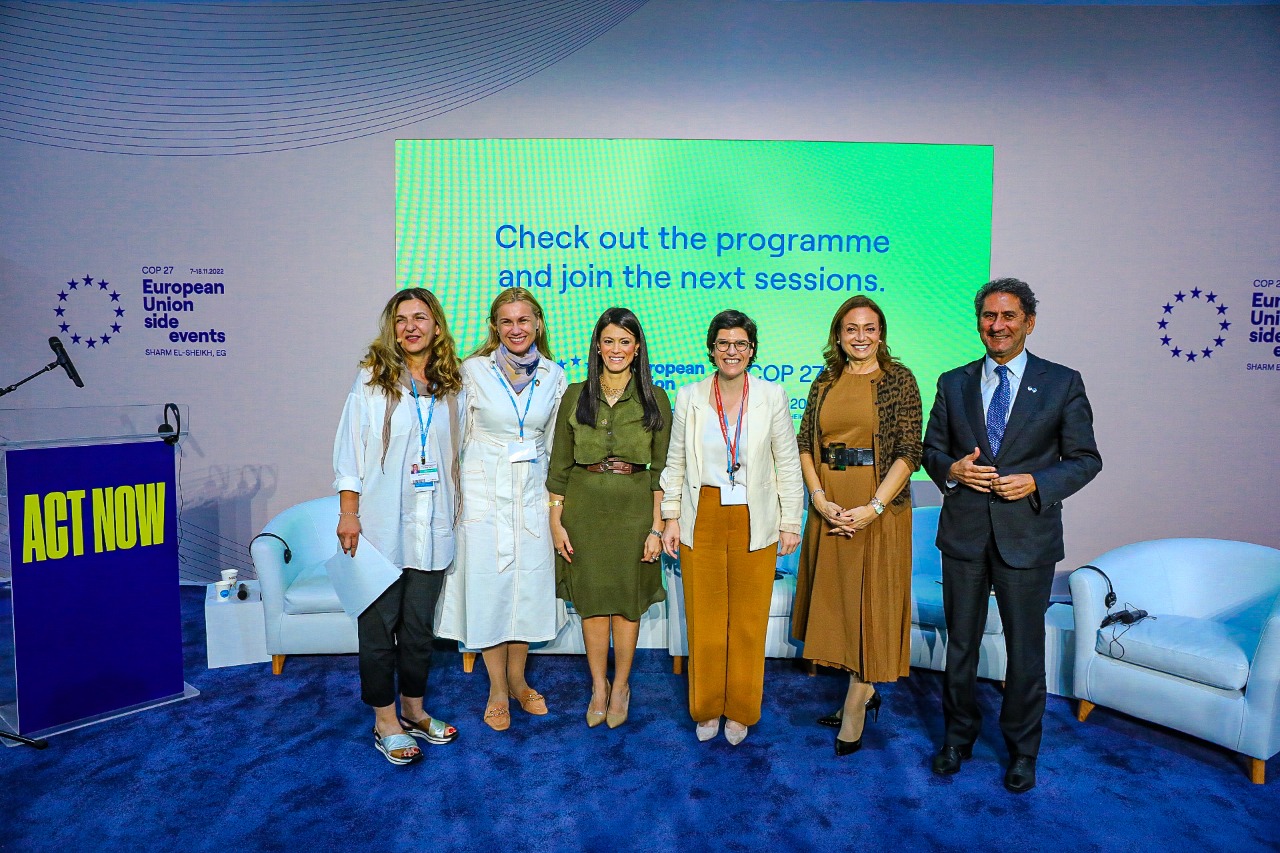 Minister of International Cooperation: Implementation of the Energy pillar within the "NWFE" program through various financing mechanisms including debt swap

Vice-President of the European Commission: Egypt has a strategy to generate green hydrogen and renewable energy the winning horse for Africa

Dr. Rania Al-Mashat, Minister of International Cooperation, participated in the round table organized by the International Renewable Energy Agency (IRENA) in cooperation with the European Union Held at COP27 Climate Conference, Sharm el-Sheikh City and the participation of Mr. Franz Timmermans, Vice-President of the European Commission, and Ms. Tini van der Straeten, Minister of Energy of Belgium, and Mr. Francesco La Camera, Director General of the International Renewable Energy Agency (IRENA) and Ms. Amani Abuzid, Commissioner for Infrastructure and Digitization of the African Union, and Ms. Kadri Simson, European Union Energy Commissioner, as well as Ms. Odile Renaud-Basso, President of the European Bank for Reconstruction and Development through video.

In her statement, Dr. Rania Al-Mashat said that since 2014, Egypt has initiated plans and structural reforms to expand renewable energy, stimulate private sector investment and increase its contribution to solar and wind energy generation efforts, which has helped the state much in the current period to build on what has been achieved since 2014 and strengthen efforts to transition to a green economy.

The Minister of International Cooperation stated that the State is moving forward in the current period to increase climate action efforts and generate renewable energy. The Government has also started a strategic collaboration with Norwegian company Skatek to implement the first phase of the green hydrogen project in the economic zone of the Suez Canal to become an important center for the continent of Africa, emphasizing that international partnerships and the role of international financial institutions are also present in this partnership through the International Finance Corporation

She stressed that the State's success in implementing structural reforms and establishing a regulatory framework enabled it to increase renewable energy capacities, providing gas for traditional power plants and increasing foreign exchange earnings, and stimulating the private sector through funding from international financial institutions such as the European Bank, IAEA and others.

Egypt is moving forward with many steps towards implementing climate commitments in line with the objectives of the Climate Conference and promoting environmentally friendly development efforts, explaining that NWFE is based on key principles: a strong commitment by the State to green transformation, clarity in project formulation and credibility, which earned the relationship with development partners an important pivot.

Franz Timmermans, Vice President of the European Commission, said that Egypt has a clear strategy for generating green hydrogen and expanding renewable energy, explaining that renewable energy from its various sources will be the winning horse for Africa over the coming period.

The expansion of green hydrogen generation represents a sustainable energy-saving solution and a strong opportunity for developing and continental African countries in particular to enter into competition for energy markets and generate huge returns.

For her part, Amani AbuZaid, Commissioner for Infrastructure and Digitization of the African Union, said that Egypt is organizing an exceptional and very different version of the COP27 climate conference, praising Egypt's efforts in Egypt to host and organize the conference at the highest level.