At the beginning of its activities during its "Water Day" events at the Climate Conference COP27: Minister of International Cooperation Rania Al-Mashat participates in a European Bank for Reconstruction and Development panel discussion on "Water and enhancing sustainability efforts" along with the Moroccan Minister of Water, Head of Sovereign Fund and Private Sector Companies 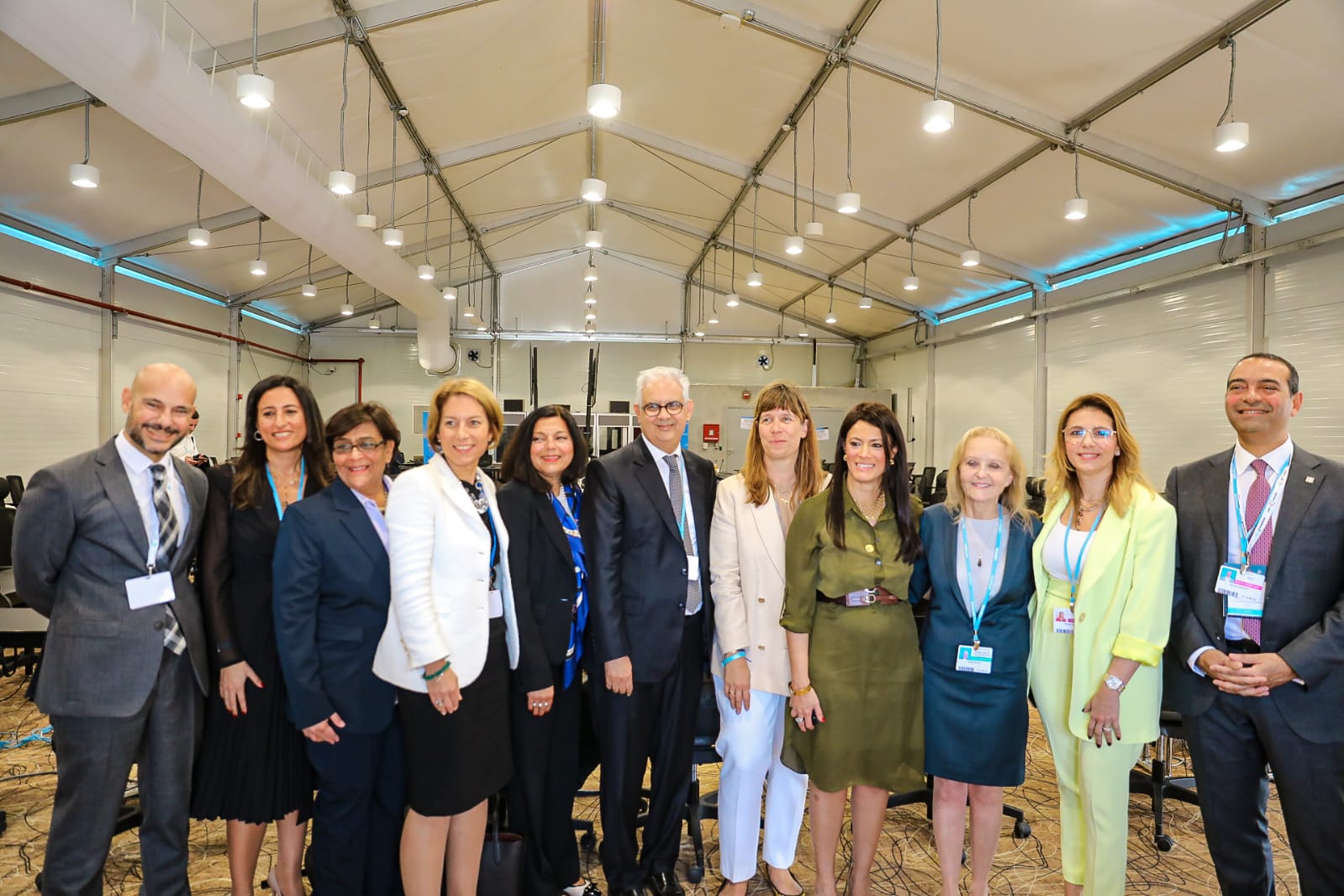 Rania Al-Mashat Minister of International Cooperation on the "NWFE Program": The State has a strong commitment to climate action, clarity in the presentation of projects and credibility in the implementation of targets

The private sector is a key partner for the implementation of NWFE projects.

European Bank for Reconstruction and Development: Proud of our major partnership with the Government in the energy pillar of the "NWFE" program

Dr. Rania al-Mashat, Minister of International Cooperation, said that the Egyptian government has taken many policies over the past period to promote adaptation to the effects of climate change, promote sustainable practices in the water and agribusiness sectors, and increase the private sector's participation in investment in these sectors.

This came during the European Bank for Reconstruction and Development (EBRD) panel discussion on "Water Day" at the COP27 Climate Conference, on "Water scarcity and sustainability, balancing the water, food and energy sectors ", in the presence of Mr. Baraka, Moroccan Minister of Water and Mr. Ayman Suleiman, President of the Egyptian Sovereign Fund and Mr. Omar Allam, Co-Chairman of Hassan Allam, and Ms. Reham Baltaji, Chief Financial Officer Oraxom, Mr. Paddy Padmanthan, CEO of Aqua Power and Mr. Rami Ghandour, Managing Director of Metito, moderated by Ms. Sue Barrett, Head of Infrastructure for the Middle East, Africa, Turkey and the United Kingdom at the European Bank for Reconstruction and Development, and Ms .Nandita Parshad, Director of the Bank's Sustainable Infrastructure Group.

The Minister of International Cooperation explained that the national platform for green projects "NWFE", focus of the interconnectedness of water, food and energy projects, is one of the pivotal programs launched by the Egyptian State in the light of the National Strategy for Climate Change 2050 in order to promote sustainable practices in these three sectors, given their importance for environmentally friendly development and to stimulate food and water security, Projects included in the program promote green transformation by enhancing adaptation to the repercussions of climate change in the agriculture, water and also energy sectors by transforming thermal power plants into renewable energy.

Al- Mashat continued: These projects are also expanding desalination plants, enhancing resilience and resilience of smallholder farmers, protecting vulnerable rural and agricultural areas from adverse impacts through early warning systems, emphasizing that these projects enhance the sustainability of the state's climate and development efforts and stimulate sustainability in critical sectors.

Noting that the NWFE program offered multiple opportunities for relevant Parties to contribute to driving the shift from pledges to implementation by investing in 9 priority water, food and energy projects that varied between mitigation and adaptation projects, It promotes the empowerment of smallholder farmers and faces the risks of climate change on our rural communities needs and environmental conservation, and supports inclusive and sustainable growth.

Al-Mashat stated that climate and development efforts are not new in the State's development plans. Since 2014, the Egyptian State has worked to move forward to expand development efforts while respecting environmental standards, water treatment system projects implemented through international partnerships with multilateral and bilateral development partners, It is one of the largest stations of its kind in the world, providing water to reclaim more than 340 thousand acres in North Sinai. In addition, the Egyptian Government is keen to stimulate government-private partnerships to expand sustainable practices and adapt to climate change.

She stressed the need for Governments to create a participatory and sustainable approach to stimulate the expansion of adaptation efforts to climate change, particularly in the water and food sectors, through the participation of relevant parties, which the Egyptian Government had already done through its program NWFE a replicable integrated approach in developing countries and emerging economies to mobilize climate finance and innovative financing mechanisms to support climate action stimulus efforts.

The Minister of International Cooperation stated that there was close interdependence between the three sectors of the "NWFE", where renewable energy projects within the energy pillar contribute to the provision of energy for water treatment plants and clean desalination, which in turn make water available for various activities, including agriculture, indicating that from this interdependence and harmony Egypt has launched a platform with investment attractive projects through which it can mobilize climate finance for adaptation projects and mitigate the effects of climate change.

The Minister of International Cooperation stressed that the National Platform for Green Projects "NWFE" program is based on three basic principles: first, the commitment of the Egyptian Government to advance climate action efforts and the transition to a green economy; Second: clarity where full information about each project is available, its purpose and the feasibility studies required; And finally, credibility: where the State works to achieve and work on its goals, strengthen international partnerships and take into account governance standards and differences between each development partner.

In her comment, Ms. Nandita Parshad, Director of the European Bank for Reconstruction and Development's Sustainable Infrastructure Group, said that the NWFE program is a model for mobilizing climate finance and meeting the needs for green transformation, noting that the EBRD is proud to be a key partner in the program’s energy pillar to mobilize finance on expanding renewable energy efforts.

In the light of efforts to mobilize accessible development financing and strengthen international partnerships to implement the National Agenda for Climate Change 2050 and the nationally determined contributions of NDCs, the Ministry of International Cooperation announced the signing of a number of partnership agreements and letters of intent between the Egyptian Government, multilateral and bilateral development partners and international institutions to finance the projects of the National Green Projects Platform Program "NWFE" in the water, food and energy sectors, where the signing events witnessed Dr. Mostafa Madbouly, His Excellency the Prime Minister, the international community and ministers from the Egyptian Government.