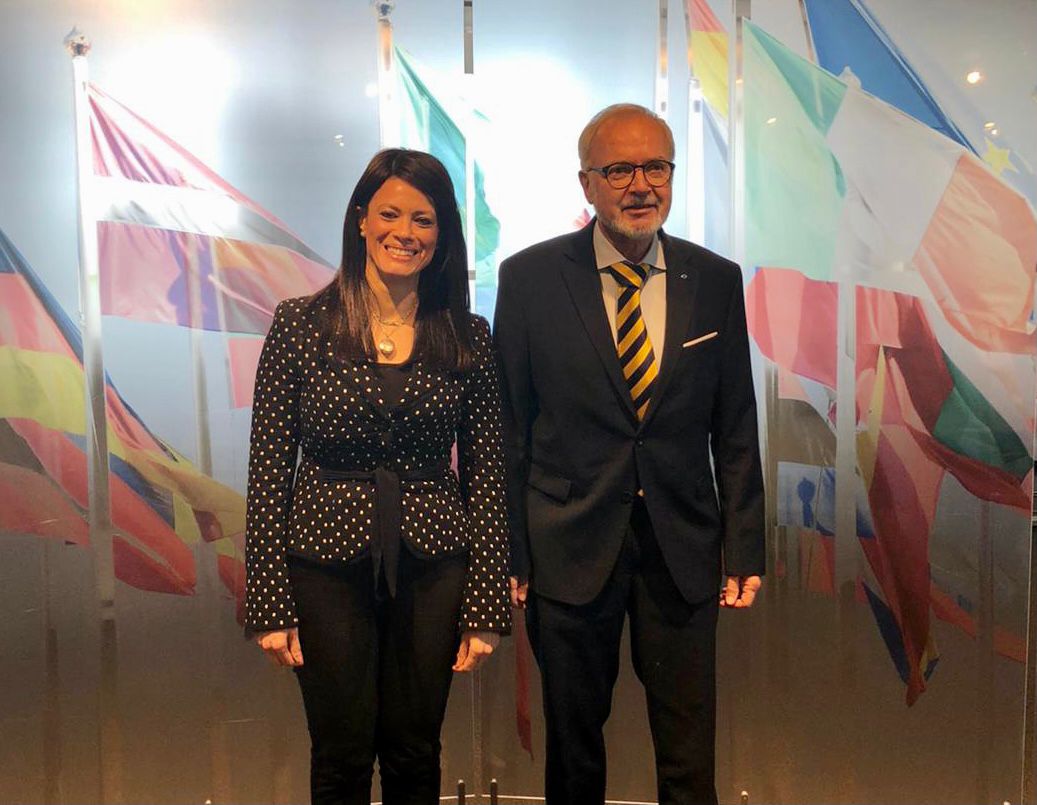 H.E. Dr. Rania A. Al-Mashat: “Egypt has a strategic relationship with the European Investment Bank (EIB), which has supported development across several sectors.”

The meeting discussed ways to benefit from the EIB’s Climate Bank Roadmap 2021-2025, in light of National Climate Change Strategy 2050 and the country’s priorities.

They also looked into potential opportunities within the 2021-2027 joint strategy, particularly in the education, health, and sustainable infrastructure sectors.

President of EIB Werner Hoyer: “We are committed to continuing our long-standing partnership with Egypt in support of the climate change strategy and to encourage green investments.”

The Minister of International Cooperation, H.E. Dr. Rania A. Al-Mashat met with the President of the European Investment Bank (EIB) Dr. Werner Hoyer, along with several of the bank’s directors, as part of her visit to the headquarters in Luxembourg. This visit falls within the framework of enhancing relations between Egypt and the EIB, the financing arm of the European Union (EU). This is also the second meeting between Al-Mashat and Hoyer, as the first meeting took place during the World Bank Group (WBG) and International Monetary Fund (IMF) Spring Meetings.

During the meeting, they discussed cooperation between Egypt and the EIB, within the framework of the country’s COP27 Presidency, to be held in Sharm El-Sheikh by the end of the year. They also looked into potential joint projects that can be strengthened, in support of the transition to a green economy and in line with climate action.

The Minister emphasized the importance of enhancing cooperation with the EIB to increase private sector participation in implementing adaptation and mitigation projects, addressing climate action.

Moreover, Al-Mashat referred to the EIB’s strategy through which it aims to transform from being “an EU Bank supporting climate” into the “EU Climate Bank”. The Minister stressed the Government of Egypt’s keenness to enhance cooperation with the bank in this regard, especially in line with the National Climate Change Strategy 2050, and considering the country’s effort to mobilize investments for adaptation and mitigation projects; supporting resilience and climate action while also promoting a transition to the green economy. Al-Mashat explained that the Ministry is coordinating with all national entities and the private sector to establish constructive international partnerships that support the state’s development vision.

Previously, the EIB had announced its Climate Bank Roadmap 2021-2025 plan, aiming to increase its level of support to climate action and environmental sustainability to exceed 50% of its overall lending activity by 2025 and beyond, and thus helping to leverage $1 trillion of investment by the EIB Group over the decade in order to accelerate the transition to a climate neutral, climate‐resilient and sustainable economy. The Ministry of International Cooperation organized a session to look into the plan last October with the participation of ministries, national entities, the business community and relevant parties.

Al-Mashat and Hoyer also looked into ways to benefit from the bank’s position in chairing the multilateral development bank working group in the current year. They emphasized the need to work to support the Green Debt Swap in order to secure development financing for the implementation of environmentally friendly projects, while also providing technical assistance in project implementation.

The President of the EIB Werner Hoyer said: “It is a great pleasure to welcome H.E. Dr. Rania A. Al-Mashat, Egypt’s Minister of International Cooperation, to the EU Bank’s headquarters in Luxembourg. The EIB has worked with Egypt since 1979 and we will continue our partnership to support the country’s ambitious National Climate Change Strategy 2050, including investments in energy, transportation, agriculture and water resources. We look forward to cooperating with Egypt as the incoming COP27 Presidency, and work together to deliver a successful outcome of the United Nations climate conference to be held in Sharm El-Sheikh in November.”

It is worth noting that ever since 1979, Egypt and the EIB hold a development cooperation portfolio worth €12.6 billion, with a current portfolio of €3.49 billion. This includes grants and development financing directed to 20 projects in the renewable energy transition, environment, and sustainable transportation and infrastructure.