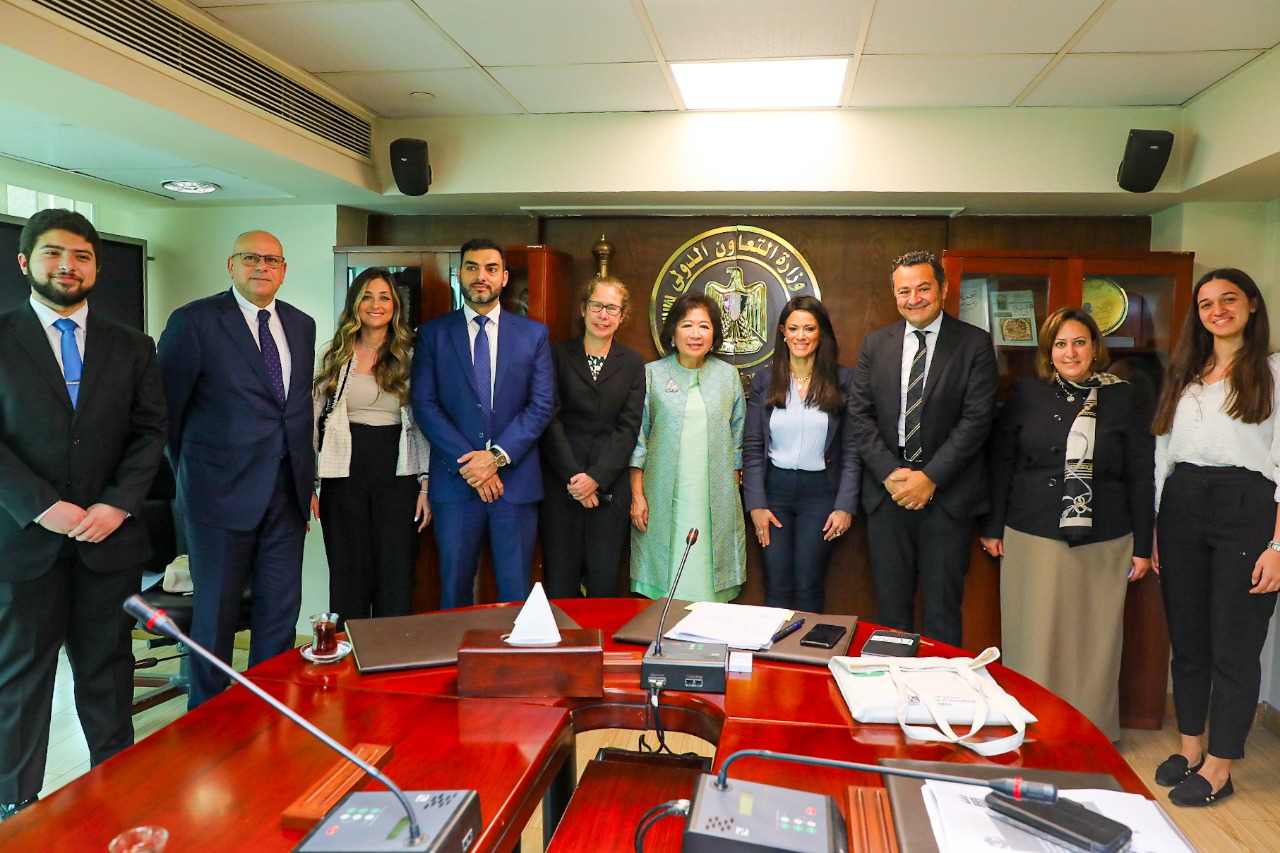 ● The meeting discussed many joint cooperation files, including the partnerships between the Government of Egypt and the World Bank Group (WBG) on COP27 and the CCDR Report.

● H.E. Dr. Rania A. Al-Mashat reviews the Government of Egypt’s efforts to transition to a green economy and support regional and international efforts on climate action.

● H.E. Dr. Rania A. Al-Mashat: “Egypt has many successful projects in adaptation and mitigation, addressing the repercussions of climate change in cooperation with development partners and through public-private partnerships.”

● The World Bank Group’s Managing Director of Development Policy & Partnerships Dr. Mari Pangestu, affirmed the WBG’s keenness in directing all means of support to Egypt in its presidency of COP27, and to promote innovative financing tools.

The Minister of International Cooperation H.E. Dr. Rania A. Al-Mashat met with the World Bank Group’s Managing Director of Development Policy & Partnerships Dr. Mari Pangestu during her visit to Egypt to hold a number of meetings within the framework of cooperation with the government in its presidency of COP27.  The meeting was attended by several WBG officials including; Marina Wes, Country Director for Egypt, Yemen and Djibouti; Robert Bou Jaoude, Operations Manager, Middle East and North Africa; Yasmine El Hini, Country Officer and Acting Country Director, IFC;  Adeel Abbas , Senior Climate Change Specialist; and representatives from the Ministry of International Cooperation.

The meeting included discussions on a number of files, most notably Egypt’s presidency of COP27, where the WBG had made several proposals for cooperation with the government, such as implementing development projects and providing technical assistance at the national and regional levels. The meeting also looked into ongoing projects with the WBG in the environment sector, and the joint country strategy between Egypt and the bank, as well as cooperation in the green transformation, and efforts done in the Hayah Karima Presidential Initiative (Decent Life). They also discussed the Country Climate and Development Report (CCDR), which aims to assess the risks of climate change, and identify opportunities for mitigation and adaptation actions, with a focus on water and agricultur, energy and industry, and resilient cities and coastal economies.

At the beginning of the meeting, Al-Mashat welcomed  Pangestu, and stressed the strategic relationship between Egypt and the WBG, which is one of Egypt’s largest multilateral development partners with a diversified ongoing portfolio, covering many priority sectors in support of the 2030 Agenda.

Al-Mashat explained that Egypt is working, through its presidency of COP27, to enhance efforts for climate action. She pointed out that Egypt has taken clear steps towards the green transformation by inaugurating the National Council for Climate Change headed by the Prime Minister, working to launch the National Climate Change Strategy 2050, identifying projects in various sectors related to climate action efforts and in providing development financing, in cooperation with multilateral and bilateral development partners.

The Minister referred to continuous coordination and discussions with the WBG and multilateral and bilateral development partners to support the country’s efforts in  financing mitigation and adaptation projects to address the repercussions of climate change.

Al-Mashat spoke about the measures taken by the state to implement environmentally friendly projects and to expand green financing tools. In 2020, Egypt was the first country in the Middle East and North Africa to issue $750 million worth of 5-year sovereign green bonds, and in 2021, the International Finance Corporation (IFC) provided $100 million in Egypt’s first private sector green bond issuance

The Minister added ath Egypt has many successful projects in adaptation and mitigation such as the Benban Solar Park, which was financed by a number of development partners, including the IFC, as well as water treatment projects, such as  the Bahr El-Baqar Wastewater Treatment Plant and the Gabal El-Asfar Wastewater Treatment Plant. Al-Mashat said that alongside the support of development partners in financing projects, public-private partnerships also play a key role, such as the the 6th of October Dry Port, supported by the European Bank for Reconstruction and Development.

The Minister of International Cooperation said that Prime Minister Mostafa Madbouly met with David Malpass, President of the WBG, last March, with the participation of the bank’s leaders. President Malpass was also invited to participate in the launch of the Qatar Partnership Framework between Egypt and the WBG in Cairo in June, as well as to attend the second Egypt - International Cooperation Forum (Egypt -ICF).

Al-Mashat also referred to her participation in the “Green Banks” Event, as part of the MENA Climate Week in Dubai, and to her bilateral meetings with the Climate Investment Funds (CIF) during her visit to the UK in March.

For her part, the WBG’s Managing Director of Development Policy & Partnerships  thanked Al-Mashat for the meeting, and for the continuous coordination with the Bank to enhance the strategic partnership with Egypt. Pangestu stressed the WBG’s keenness to direct all means of support to Egypt under its presidency of COP27, and to stimulate climate action efforts in the country, and in Africa as a whole.

The cooperation portfolio between Egypt and the WBG amounts to $5.5 billion, covering 15 projects in transportation, education, housing, health, social protection, petroleum, housing, sanitation, local development and the environment. Moreover, the International Finance Corporation (IFC), directed development financing worth $421 million to the private sector in Egypt in 2021.