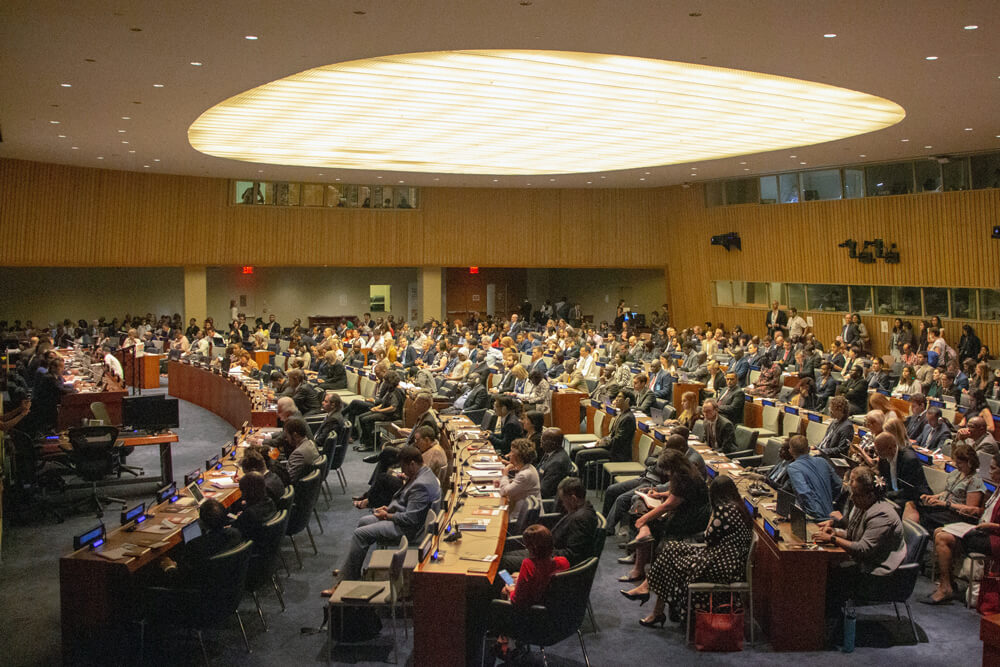 Minister Dr. Rania Al-Mashat the Minister of International Cooperation presented a New Global Partnerships Narrative noting that all measures to mitigate the impact of the novel corona virus should not derail development efforts from its intended purposes especially achieving SDGs, this comes after the UN reflected fears that efforts for combating the virus might risk overlooking the SDGs objectives causing negative consequences after the alleviation of the pandemic.

The presentation took place during the videoconference meeting chaired by Minister Dr. Rania Al-Mashat with more than 100 professionals representing heads of country offices, development professionals from bilateral partners as well as multilateral development organizations to discuss opportunities for advancing and promoting future mutual economic cooperation and consequences of the spread of novel corona virus. The meeting was attended by representatives of UN agencies, World Bank Group, International Monetary Fund, African Development Bank, European Bank for Reconstruction and Development, Islamic Development Bank Group, Arab Fund for Economic and Social Development, USAID, Japanese International Cooperation Agency, French Agency for Development, European Investment Bank, German Development Agency along with Ambassadors and heads of economic cooperation in embassies for numerous bilateral development partners. During the meeting Dr. Al-Mashat unveiled the New Global Partnerships Narrative that will define cooperation between Egypt and the international development community, the P&P&P (People&Projects&Purpose). The presentation can be found in the following link: http://bit.ly/MOICGlobalPartnershipsNarrative The Minister mentioned that discussions during the meetings focused on Egypts efforts for promoting structural reforms and economic stimulation as well as financial inclusion which all serve achieving the SDGs. She highlighted the new vision of the ministry to reshape the strategic communication narrative in a way that clearly defines Egypt development initiatives in collaboration with development partners for both Egyptian people domestically as well as internationally for development partners. The new narrative as the Minister presented will focus on three pillars which are PEOPLE AT THE CORE, PROJECTS IN ACTION and PURPOSE AS THE DRIVER to highlight the development cooperation to achieve SDGs which is priority on all sectors, the Minister confirmed the commitment of the ministry (through the current development portfolio) to achieve these SDGs locally and internationally. Through its communication framework, the Ministry of International Cooperation aims to transparently showcase projects and their impact on boosting inclusive growth as a means to promote SDGs and bolster credibility, the minister added. The Minister also mentioned that Egypt has made investment in people a top priority, as improving human capital is integral to the countrys overall development. Committed to improving the Egyptian peoples lives, every partnership identifies existing gaps and provides multi - sectoral assistance to millions of beneficiaries through public private partnerships that push Egyptians towards realizing their full potential. As for the second pillar, the Minister indicated that Projects have been implemented accross multiple sectors including in education, transportation, water desalination, renewable energy, enterprenership, women empowerment, among others. The several projects completed and the many in progress answer to each of the United Nations 17 SDGs. For the third pillar which is purpose as the driver, the Minister referred to the partnerships with purpose have been a driver to generate sustained and inclusive growth, stay agile in a rapidly changing world, and deepen ties with our stakeholders. Purpose in our projects serves important strategic roles: defining our playing field through collaboration with our multilateral and bilateral partners, and allowing us to shape our growth potential. Richard Dictus, UN Resident Coordinator, Egypt commented that The extremely constructive and forward-looking presentation by H.E. Dr. Rania Al-Mashat confirms the partnership between the Ministry of International Cooperation and International Development Partners, especially at the time of this global pandemic. The United Nations reaffirms its strong commitment to and partnership with the Government of Egypt in its efforts. Commenting on the new narrative; Randa Aboul-Hosn, UNDP Resident Representative in Egypt said that the Ministry presented a coherent and innovative mapping and alignment of development cooperation in Egypt to the Sustainable Development Goals. The triple P is now an important narrative we can all follow. H.E.Ambassador. Masaki Noki, Japan Ambassador to Cairo mentioned that the Japanese Government supported Egyptian people in many development projects in Education, Culture, Tourism and Antiquities. One of which most important is the Grand Egyptian Museum. The Ambassador acknowledged the new communication strategy of the Ministry which focuses on informing people of development projects and its relation to SDGs. H.E.Ambassador Yon Yo Chol, Ambassador of South Korea to Egypt noted that his country is working in development with Egypt since long time. The Korean government financed many projects namely; the Korean Egyptian Technology University, as well as other infrastructure projects like modernizing railway signals for Nagaa hamadi Luxor line. The ambassador added that Korea is considering other financing for desalination and solid waste management. He also mentioned that Korea is ready to support Egypt in combating the spread of the virus acknowledging the measures that the Egyptian government took in this regard. The head of Swiss Economic Cooperation acknowledged the new strategy and narrative and also she acknowledged the initiatives taken by the Egyptian Government to mitigate the impact of the virus confirming that Switzerland is ready to help Egypt in combating the virus. The Chief Executive Director of the Islamic Trade Finance Corporation Eng. Hany Sonbol, ensured the commitment of the corporation and the Islamic Development Bank group t