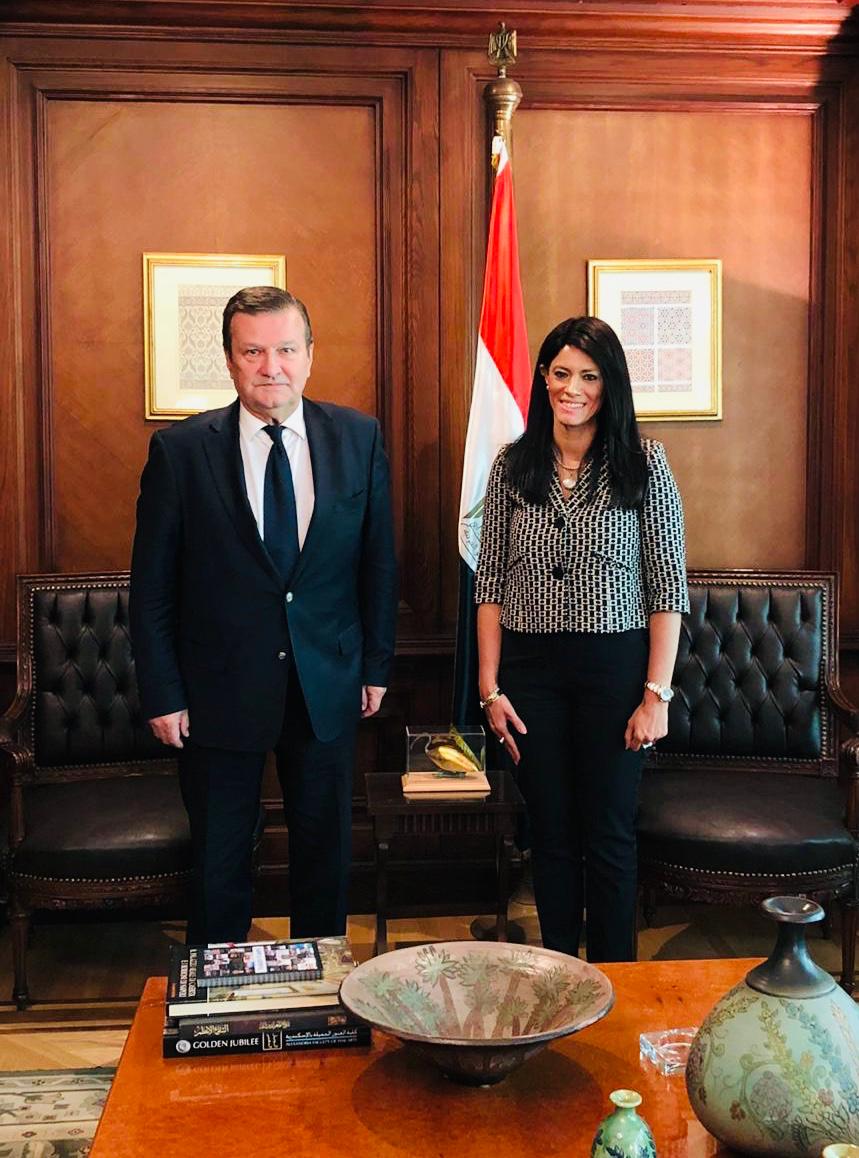 Minister of International Cooperation, Dr. Rania Al-Mashat, met with Mr. Evhen Miketenko, Ambassador of the Republic of Ukraine in Cairo, to discuss holding a joint Egyptian-Ukrainian committee and to deepen cooperation between the two countries, within the framework of the Ministry's role in strengthening economic cooperation relations of Egypt with regional and international organizations and development partners. Al Mashat said that the meeting reviewed areas of joint cooperation between Egypt and Ukraine, and sought to strengthen cooperation by prioritizing sectors that are most essential for Egypt’s economy, such as investment, trade, tourism, oil, industry and scientific research.

The minister added that there is strong coordination with Ukrainian embassy in Cairo on joint cooperation and bilateral economic relations between the countries, and that both countries are reviewing recommendations of the seventh session of the Egyptian-Ukrainian Joint Committee held during 2018, which was considered an opportunity to explore new areas to explore complementarities and to pin the starting point for future cooperation between the two sides. Al-Mashat underscored the depth of Egyptian-Ukrainian relations, and Egypt's keenness to strengthen the Egyptian-Ukrainian relations and implement projects that support the Egyptian economy and invest in people to promote sustainable development. The Ministry of International Cooperation seeks to strengthen economic diplomacy through three principles, which include regularly organizing multi-stakeholder platforms to ensure that all projects between development partners are streamlined and effectively coordinated, adopting a consistent Global Partnerships Narrative People&Projects&Purpose (P&P&P); and mapping ODA financing to SDGs for all projects with multilateral and bilateral development partners. Ukraine and Egypt have presented a successful model in cooperation, the minister noted, through the launch of a number of mega national projects that would put Egypt on the map of emerging economic powers such as the project to develop the Suez Canal region, the construction of the new administrative capital project, the establishment of a national road network, the development of many airports and sea ports, and the development of oil and natural gas fields. For his part, the Ukrainian ambassador in Cairo affirmed his country's keenness to strengthen cooperation with Egypt, in a way that would contribute to deepening the partnership between Egypt and Ukraine in various fields and promoting it to a stronger partnership. It is worth noting that during the seventh session of the Joint Committee for Economic Cooperation, a memorandum of understanding was signed between the Damietta Port Authority in Egypt and the Odessa Port Authority in Ukraine, as well as a memorandum of understanding between the Alexandria Port Authority and the Odessa Port Authority. The committee seeks to find the necessary legal framework to advance bilateral cooperation relations between Egypt and Ukraine, as well as to facilitate trade exchange and strengthen relations between the private sector of the two countries, and to create an appropriate environment for businessmen to contribute to the completion of development, increase inter-investment, as well as cooperation in areas of health, agriculture, and energy to promote inclusive and sustainable development.