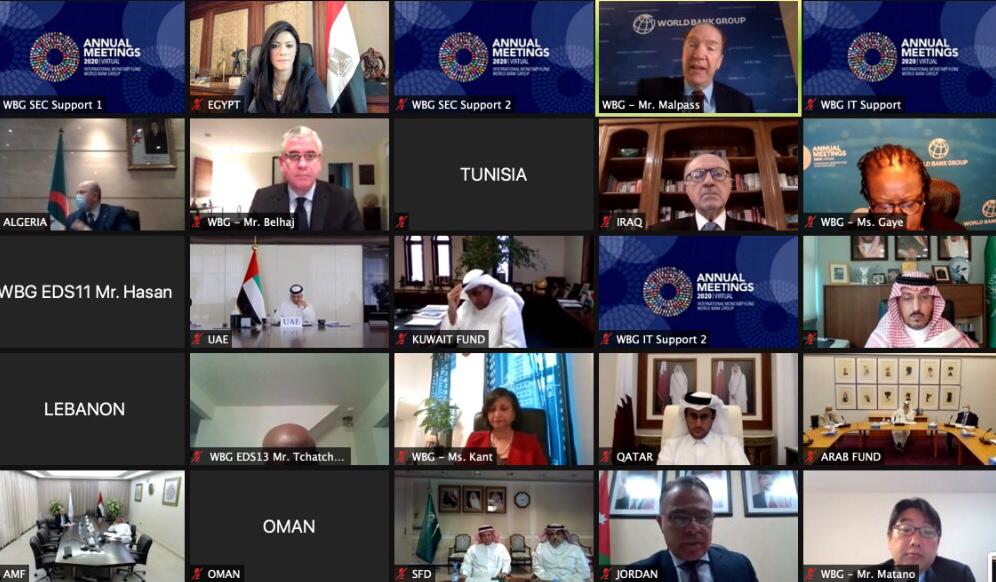 Minister of International Cooperation and Governor of Egypt at the World Bank Group, Dr. Rania Al-Mashat, participated in the World Bank’s meeting for Governors of Arab countries with Mr. David Malpass, World Bank Group President, on Thursday to discuss the impact of COVID-19 on Arab economies.

In her speech, the Minister of International Cooperation said that Egypt’s implementation of structural reforms with the International Monetary Fund during the period 2016-2019 prepared its economy for the impact of the ongoing global pandemic. “We entered this crisis with fiscal buffers as well as foreign reserve buffers, which helped weather the first shock,” H.E. Dr. Rania al-Mashat said. Egypt’s response strategy was based on three pillars: protect, provide and progress. It focused on protecting the population from the virus, providing easier access to credit to help households smooth consumption as well as liquidity for firms to survive the disruption, and pushing for progress by expediting structural reforms through and beyond COVID-19. REVERSING INEQUALITY: UNLEASHIONG POTENTIAL OF AN EQUITABLE ECONOMY Inequality in society has increased as a result of the pandemic, and is expected to increase further as the World Bank recently unveiled that the COVID-19 pandemic is estimated to push an additional 88 million to 115 million people into extreme poverty by the end of 2020. To unleash the potential of an equitable economy, the Minister highlighted that 60,000 households were added to Takaful and Karama Program, and that additional 100,000 will be added as the budget will increase to 19.3 Billion EGP compared to 18.5 billion EGP. One of the important reforms that were implemented includes the “Closing the Gender Gap Accelerator”, which aims to boost inclusion and diversity in the workplace through integrating more women into the labor force, particularly in the private sector. INTERNATIONAL COOPERATION FOR BETTER DEVELOPMENT Al Mashat added that international cooperation delivers results for Egypt’s economic development as proved by indicators, referring to the recent report by the European Bank for Reconstruction and Development, which estimated that Egypt’s economy will grow by 2% in 2020 and 5% the next year, making it the only economy to escape recession this year. However, she added that there are is still potential to achieve more results for the entire global economy. Al Mashat called on international institutions to explore adopting ‘blended financing’ in order to merge public and private funds to mobilize private capital flows to emerging and frontier markets. For his part, Mr. David Malpass, World Bank Group President, referred to the education and social protection programs implemented through the Takaful and Karama project, calling these projects as “models for effective development” for the Middle East and Africa. Malpass stressed on the need to focus in the coming period to invest in human capital, and to achieve transparency in a way that ensures attracting more investments to achieve recovery from the crisis. Obaid Humaid Al Tayer, UAE Minister of State for Financial Affairs and Chairman of the meeting, highlighted efforts of the World Bank to take measures to limit the repercussions of the pandemic, calling on the G20 to extend debt freeze and make private sector involvement mandatory, which represents 40% of long-term debt. During the meeting, Arab governors called for the World Bank to provide public, private, and public-private partnerships solutions to foster economic growth; strengthen the resilience of national institutions; improve social protection systems; invest in human capital; support the private sector; create jobs including through facilitating entrepreneurship and enhance social cohesion.